A Hindu temple holding its deity as MahaVishnu, one among the 108 Divya Desams of Vishnu dedicated to Ranganatha, bearing the name Sri Ranganathaswamy Temple or Thiruvarangam situated in Srirangam, Tamil Nadu, has several names such as Bhogamandabam, Periyakoil, Thiruvaranga Tirupati and Bhoologa Vaikundam. In ancient times, Srirangam was called the Vellithirumutha Gramam. It has two major deities holding two major temples in the site – one for Ranganatha (Vishnu) and the other for Jambukeshvara (Shiva). The temple sits on Thirunavelantheevu, an island also called as the Antharangam meaning the last part of the heaven. 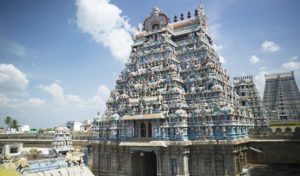 The temple falling under a military encampment site between two rivers Kaveri and Kollidam has led to flooding as well as the invasion of the armies that led to the destruction of the temple in the 14th century by the Delhi Sultanate through a plunder raid on the Pandya Kingdom. It was rebuilt in the late 14th century and its territory was extended in 16th and 17th century rendering it as the world’s largest functioning Hindu temple with the largest temple compound and largest religious complexes that served as hubs for the Bhakthi movement. The entry of non-hindus is restricted in some places of the temple. The temple leads us to the culture and society of South India of the mid medieval period proving its importance in architecture, archeology, history and stands as the world heritage site nominated by the UNESCO. The temple is the finest example of temple town and traditional human settlement of the Tamil culture. The temple has won the UNESCO Asia Pacific Award of Merit 2017 for cultural heritage conservation. 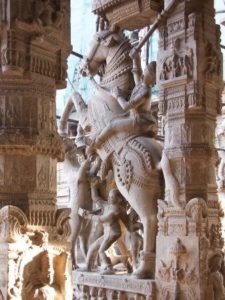 Though literature says that the temple existed from the Sangam era, evidences of archeology are available only from the 10th century. In 13th century, a prominent General of Alauddin Khilji, Malik Kafur invaded the temple town and stole the idol and fled to Delhi. Later when devotees ventured into Delhi, the emperor was enthralled by their histrionics and gifted them back the presiding deity of Srirangam on behalf of the request of the performers. Surathani, the daughter of the General Malik Kafur, fell in love with the deity, went to Srirangam and prostrated herself before the sanctum sanctorum of the God and is believed to have attained heavenly abode. 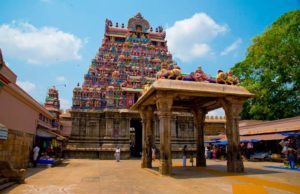 The temple covers an area of 155 acres with 17 major gopurams, 21 towers, 81 shrines, 39 pavilions, 50 shrines, 9 sacred water pools, a 1000 pillars hall popularly known as Aayiram kaal mandapam, multiple water tanks, several small water bodies and an area of the walls in total measuring up to 32,592 feet. The temple is constructed in Dravidian style architecture and aligned in the north-south, east-west axis where the design of the temple town is known as Sapta-Prakaram – summing up the seven concentric enclosures that connect the gopurams for ease of access from all directions to the sanctum designed in such a way that all the gopurams, sanctums, living area and services fall under the seven enclosures. 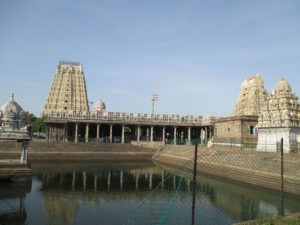 The annual 21-day festival conducted during the Tamil month of Margazhi (December–January) attracts 1 million visitors. The main festivals of the temple are the Vaikunda Ekadesi and the Aadi Bharam Mahotsavam. Another unique feature of the Srirangam temple layout is that starting with the eastern outer wall of the sanctuary, there are consecrated mini-mandapams posing the blessed feet of the Lord in collinear fashion through the seven enclosures. The inner three enclosures taken together, with the Arya-bhata and the Parama-pada gates defining the south-north axis, constitute the inner court and the entire outer area is occupied by the rest of the enclosures known as the outer court. A separate concentration of the constructions led by Chakararaya and Vijayanagara rulers are also found.