A Hindu temple dedicated to Lord Shiva – named as the Nataraja Temple signifying Nataraja, the Lord of Dance also holds different names such as Thillai Nataraja temple and Chidambaram Nataraja temple, which is situated in Chidambaram. When the town was called as Thillai derived from the Tillai trees and the shrine associated to this is called Shiva shrine. The meaning of the temple and the city explains it as the clothed, in thought of atmosphere of wisdom. It is one of the oldest actively functioning temple complexes in South India and was built during the period of Chola dynasty. The present temple was built as through the 2nd millennium in 10th century when Chidambaram was its capital, later expanded and renovated. 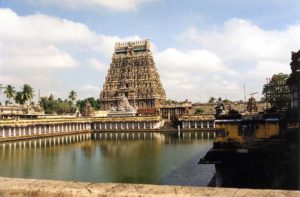 Nataraja was considered to be the family deity of Cholas. The main deity of the temple is Nataraja. The Dance of delight that is Ananda Tandava is performed in Ponambalam (temple’s golden hall) by Lord Shiva. On Maha Shivaratri, the temple is used for performing of the annual dance festival called the Natyanjali, and this temple site is largely used for performing arts. In the tradition of Shaivism pilgrimage, this shrine is considered to be one among the five elemental Lingas. In medieval Hindu texts, the name of the temple and the town appears by various additional names such as Kovil, Vyagrapuram, Pundarikapuram, Puliyur, Sirrampuram, and Chitrakuta. In Pallava period, the North Indian texts hold various other names for Chidambaram such as Ponnambalam, Kanagasabainathar, Brahmapuri and Brahmastpuri. The bejeweled image of Lord Nataraja is the unique feature of this temple as he is the main deity. 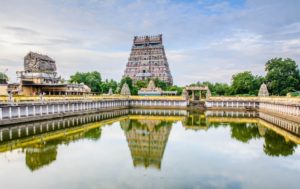 This temple architecture delivers the connection between spirituality and arts, the divine and creative activity. This temple holds the style of Dravidian architecture and the temple stands as an existence of pre-chola period. Several water tanks and nine gopurams comprise the temple complex. Shivaganga is the largest sacred pool with a rectangular plan. The sanctum sanctorum closely shows the features of Malabar or Kerala structure styles in it. Stating the mentions from the royal charters says that, the rebuilding of the sanctum was carried out by Kerala Architects. The golden roof with its apsidal shape stands as an example of Vesara style of architecture. The crux of the immense architectural complex is formed by Kanak Sabha and Chit Sabha, the two small structures. Concentric courtyards have multiple layers within which the temple lies holding an area of 40-acre spread across. The arrangements and shapes of the structures such as pillared halls, inner sanctum, mandapas etc., follow squares or stacked squares. Various shrines of Devi, Subrahmanyar, Vishnu, Ganesha, Amman shrine, Nandi, a Surya temple complete with Chariot wheels are all included in the temple. 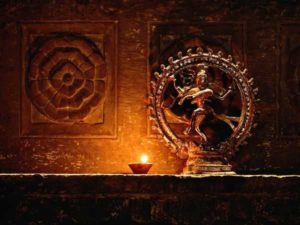 The surviving structure, plan and architecture of the temple is dated from the late 12th century and early 13th with additions in same style later times. The plan of the temple comprises many sabhas that are gathering halls, the 100-pillared halls which are the two major choultry, 1000-pillared halls, frescoes, inscriptions, speaking about the Hindu legends. 108 Karanas are portrayed on the wall carvings of the shrine from the Natya Shastra by Bharata Muni, and these mudras or postures form basement of  Bharatanatyam, a classical Indian dance.

All the gopurams are very unique-styled and colorful in its own ways which speak about the stories of various Hindu traditions. These stories and scenes are depicted in anthropomorphic figure panels and hold stone sculptures of about 50 niches on every tower. Multiple panels in the temple comprises the scenes and picturing of the wedding of Shiva and Parvati and several other scenes and their aspects.

There is only one gopuram on the west tower with the inscriptions of the artwork explaining what it is. Sokkaseeyan Thirunilai Ezhugopuram is the existing surviving-South Gopuram, which was built by the Pandya king and was found with the presence of fish emblem of the dynasty. It was sculpted on the ceiling as they practice sculpting their emblem after the construction of their gopurams. The East Gopuram features 108 dance postures. Nritta sabha is the hall where Kali and Shiva entered into a dance competition. 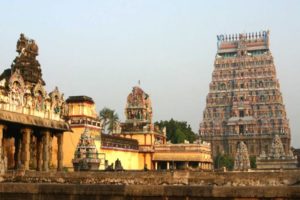 The famous Rudra-Tandava pose was won by Shiva and Kali lost it because the poses comprise a raised right leg and she refused it as she was a woman. The rectangular hall consists of 3 squares stacked. The main hall is square shaped, measures about 15m on the side and is connected by a mukha mandapa, which is rectangular measuring about 4m by 8m. There are 50 pillars in the hall currently but the earlier evidences say that it would have had 56 pillars or more.