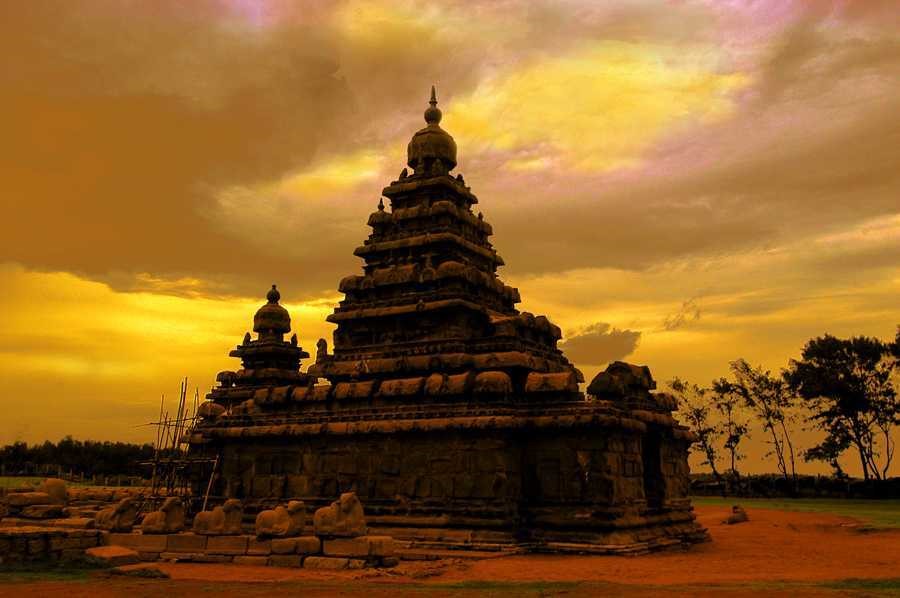 Shore Temple got its name as it is visible when you overlook the Bay of Bengal sea sitting on the shore. This temple was built during 700-728 AD and it holds a complex of shrines inside. The temple is dated from the 8th century AD. During the reign of Narasimhavarman II of the Pallava dynasty, this site was under creation phase and it was said to be a busy port and it acted as a landmark for ship’s navigation. Since 1984, among the group of monuments at Mahabalipuram, this temple has been classified as UNESCO’s World Heritage Site. It is one of the oldest structural rock-cut temples (stone temple) of South India. 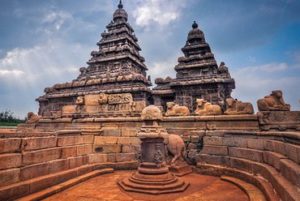 The name of the port site was “The Seven Pagodas” and it was named by the European merchants and Marco Polo who came to Asia. They both believed that the temple was named Shore as it exactly looked like Pagoda. This name is popular among the seafarers and one of the reasons behind the story as well. This piece of architectural creation and elegance was initiated by King Rajasimha of Pallava Dynasty also known as Narasimhavarman II who ruled for about twenty years. The architecture of the temple was continued by the Cholas who ruled the place after the defeat of Pallavas. 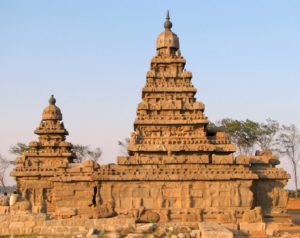 This temple exists as the last in the series of temples that is in the submerged coastline. Post the striking of the coastline by the Tsunami in 2004, it did not damage the Shore temple as much because of its hard granite foundation and the groynes around the temple, but the damage was to the Bali Peetam, Boat Jetty steps and the Varaha sculpture at the basement of the temple. The Tsunami also exposed various structures such as an old collapsed granite block temple, ancient rock sculptures of elephants, lions and peacocks that were used during the Pallava period for decorating temples and walls. 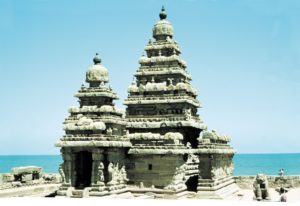 The Mamallapuram Dance Festival is conducted every year and it is a one-month long festival organized by the Department of Tourism showcasing various dances, performed before the backdrop of rock sculptures of Pallavas. The Archaeological Survey of India takes care of the temple and conserves it. The history of Mamallapuram and the Seven Pagodas have been recorded by some European travelers which indicates that the port was popular in its trading connections with foreign countries.

The temple is constructed in Dravidian style of architecture. The Shore temple is the free-standing rock cut structural temple. Being situated at sea level, it was also named as Jalashavana meaning floating or lying on the water. The Shore temple complex consists of 3 temples which are together built on the same platform. All these shrines show up to be a clone of Dharmaraja Ratha when it is seen from the northern end. 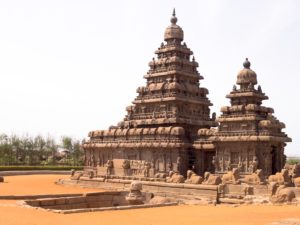 The main Shore Temple faces the east and the main deity Shiva Linga is stroked by the sun’s rays shining on it. It is a five-storied Hindu structural temple and was built by granite stones hauled from a quarry nearby. These granite stones were sculpted and this temple stands among all the south India temples of the earliest and an important structural temple in existence. The superstructure is topped with the stupi. The temple consists of a square platform measuring about 50ft on which there exists a pyramidal structure measuring about 60ft high. The original porch was the small temple in the front.

It is one of the popular temples in India where it was built out of finely cut local granite. New structures were revealed in recent excavations under the sand. Three shrines are the combination of the Shore temple delivering us the first two shrines, which is the main shrine and the second; both are dedicated to Lord Shiva. The third shrine sits in between the first two as it is dedicated to a reclining Vishnu. During the Tsunami water may have had channeled into the shrines of the temple. The configuration of the two Shiva shrines is orthogonal in shape.

The inner side of the boundary wall is topped by large sculptures of Nandi and is extensively sculptured, and the shrine’s outer wall by Vishnu. Outer walls of the temple are divided by pilasters into bays, and a series of rearing lions are carved on the lower part. 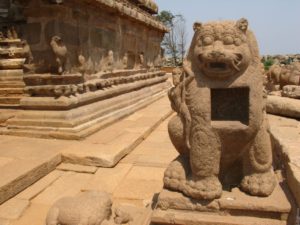 Lion monolith is a partly sculpted and partly carved lion sculpture with a hole on its torso erected in the temple complex within the compound wall. On the back of the image, a miniature image of Mahishasurmardini is sculpted, which is a depiction of Durga. The open mouth of the lion is understood as a representation of its role as the favorite mount of Durga. On the leg of the lion, a female guardian with a bow is also carved. 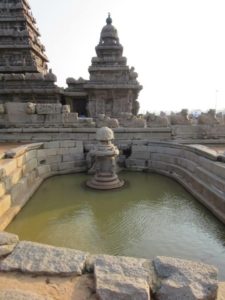 The miniature shrine was discovered by the Archeological Survey of India in 1990 with the Bhuvaraha image in a well type closure. The small shrine is dated back to the regime of King Narasimhavarman Mamalla’s (AD 638–660) of the Pallava dynasty. During Rajasimha’s (AD 700–728) period, an elliptical well was built which enclosed this shrine. This miniature shrine is dedicated to both Vishnu and Shiva. Carved from the bedrock, it has a 16-sided base. The structural type circular wall and the superstructure on the pilasters, lions are depicted and it is said to be one of the unique single-tiered temples, which is not familiar with the others temples of the Pallava period.